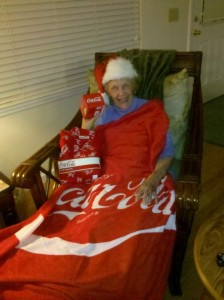 From the late 1930s until the late 1950s, Alice Jean Anderson’s picture hung on billboards, buses and buildings across six continents.

A Coca-Cola model, she had an hourglass figure that was clad in blue bathing suits for advertisements that read, “Cool and refreshing.”

She was the girl whose picture prompted boys to plop a nickel on the soda-shop counter so they would have a drink to hold as they walked down main streets looking for a girl to hold. A girl something like her.

She was also a Rockette, dancing for the big bucks – $35 a week – at New York City’s Radio City Music Hall. Although millions had seen her picture, few ever recognized her while she lived in Chicago, New York and Miami.

Now a painter in her 80s with a studio and gallery on the Florida Panhandle’s Forgotten Coast, Alice Jean Gibbs is finally being remembered.

Franklin County residents often bring antique Coca-Cola food trays, posters and drink coasters with Gibbs’ picture to her downtown Apalachicola studio. They ask her to autograph the memorabilia that is commonly found at yard sales and flea markets.

“It happens quite a bit, and you have to laugh,” Gibbs said. “I get a kick out of it, and it’s flattering.”

Gibbs, who grew up in Chicago, started modeling as a girl. When she was 17, she moved to New York to join the Rockettes. She married a concert pianist and had two daughters.

Working for Coca-Cola , Gibbs made $5 for each one-hour photo shoot. The pictures were converted to paintings by Haddon Sunblom, the artist famous for painting both the Coca- Cola Santa Claus and the Coke poster girls.

Sunblom took a liking to Gibbs, and encouraged her to start painting. She enrolled in the Art Institute of Chicago and has been an artist ever since.

Gibbs raised her daughters in Chicago and maintained a low profile. Her youngest daughter, Carol Harris, would see her mom on Coke ads on the backs of buses all over the city.

“I always knew she was beautiful and special,” said Harris, who teaches guitar in a room next to her mom’s gallery. “But I didn’t think there was anything different (about her). She was prettier than all of the other moms, though.”

In addition to being a dance instructor, Gibbs started teaching art. When Hurricane Andrew (1992) damaged her dance studio in Miami, she moved to Apalachicola.

She had never heard of the tiny town when she was modeling for Coca-Cola, although millions of units of Coke were bottled here at the time. Now, the girl with the big city roots and the big city looks feels right at home with neighbors and friends who have lived beside this bay for generations.

Sometimes on the sidewalks, a sea breeze will carry across the street the whispers of old men who point her out and remember staring at her in advertisements a half-century ago.

“She is so low key that she doesn’t say much about it (her career), but everybody’s got to know by now,” said Billy Cook, 74, of Apalachicola. His wife Elizabeth is an art student of Gibbs.

Hanging in Gibbs’ studio is a T-shirt with one of her Coke ads printed on the front. Her son-in-law bought it recently at Atlanta’s Hartsfield International Airport.

“They figure I’m dead, so I can’t collect any residuals,” Gibbs jokes.

Her hair is blonde and kept short like it was in the 1940s. Her eyes are blue. Her cheekbones and chin are pronounced and her countenance is as serene as the paradises depicted in her paintings.

Gibbs is healthy, but she “wouldn’t want to do any high kicks now,” she said.

After a day of teaching Franklin County men and women how to paint, Gibbs wrapped her arms around an easel, leaned her head against her hands, dipped her chin and looked up with tired eyes.

It was a model’s pose, effortless and sensual.

“I get into the poses sometimes, and I don’t even realize it,” Gibbs said.

Over at the Old Time Soda Fountain in downtown Apalachicola, where antique Coca-Cola bottles are displayed in the window, Karen Abas and the other women behind the counter said they had heard about Gibbs.

“I’ve found some antique drink coasters in my attic, and I’m going to take them by for her to sign,” Abas said.

from http://gulfalliance.org/index.cfm/pageId/65/:
Alice Jean Gibbs has been practicing and teaching pastel for over 20 years and oil painting for the past 7. She was trained at the Art Institute in Chicago and the Chicago Academy of Fine Art with further studies under Suzanne Diltley in Miami, Florida.
Alice’s work has been presented at the Coconut Grove Art Show, the Metropolitan Gallery in Miami, the Professional Artist League in Miami, the Visual Arts Center in Panama City and on a regular basis at the Alice Jean Gallery in Apalachicola.